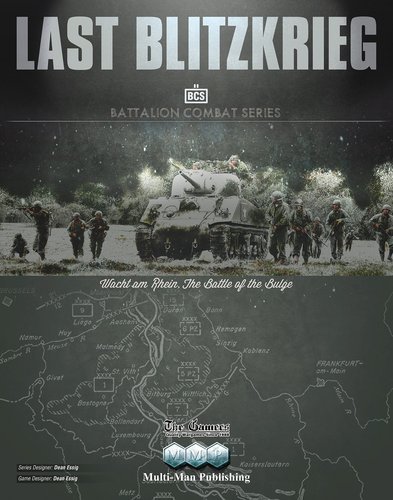 Last Blitzkrieg (Wacht Am Rhein, the Battle of the Bulge)

Last Blitzkrieg is the first entry in the new Battalion Combat Series (BCS), which simulates combat in World War II (and beyond) at the battalion scale. Its subject is the German Ardennes offensive Wacht Am Rhein (the Battle of the Bulge) on four detailed maps (at 1km per hex) and with 1,680 counters. Last Blitzkrieg covers the battle in a level of detail rarely seen before and does so in a very playable manner. The BCS itself was designed to show that battalion level combat is its own subject, being neither "small divisions" nor "large platoons". The results may surprise some players, but will hopefully pique the interest of all and allow them to see many things they thought they already knew in a fresh light.

Game play commences on 16 December 44 and ends on 31 December 44 (with each turn being one day) allowing the first phase of the Allied counterattack to proceed. The winner is determined by comparing the German high water mark in Victory Point hexes against the situation at the very end of the game.

In addition to the full campaign, which uses a 4-map "box" layout, there are 10 scenarios of various sizes:

Last Blitzkrieg was designed to bring all of this—and much more—to your table in a most historically accurate game that is jam-packed with information. The BCS was designed with twin goals: to provide the most insight possible into a battle and to provide games that have maximum playability.