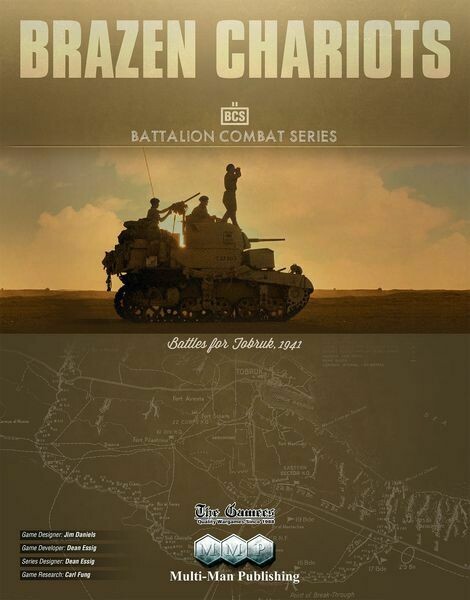 Brazen Chariots is a Battalion Combat Series (BCS) game that chronicles fighting in the North African desert towards the end of 1941. Once Axis forces under Rommel had laid siege to Tobruk, they then set about trying to take it. Meanwhile, Commonwealth forces pushed back to the Egyptian border launched several attempts to break into and relieve the fortress. Two of these efforts, BREVITY and BATTLEAXE, lacked the depth needed to accomplish this goal and were utter failures. The third, CRUSADER, was a massive undertaking that successfully opened communications to Tobruk and proved to the British 8th Army that Rommel could be beaten. It also set the stage for Rommel's Gazala offensive in 1942.

Brazen Chariots is the third game in the Battalion Combat Series, which took players by storm with its blockbuster initial release Last Blitzkrieg and follow-up fast playing game Baptism By Fire. In Brazen Chariots, the wide-open desert, the limited number of formations and numerous shorter scenarios provide players with both a rapid and fun introduction to this highly acclaimed new series. The masterful order of battle research by Carl Fung showcases the forces involved with finer detail than ever before.