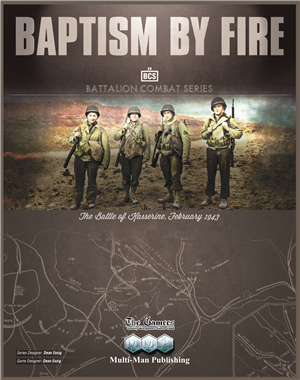 Baptism By Fire: The Battle of Kasserine, February 1943

Baptism By Fire: The Battle of Kasserine, February 1943 (Battalion Combat Series [BCS]) chronicles the first real ground operations by the US Army in the ETO in WW2. Every wargamer knows this battle was a severe Allied setback. What is not obvious, however, is that Allied troops on the ground gave a good account of themselves against the remnants of Rommel's vaunted Afrika Korps, despite the ineffective and confused leadership that existed at Corps level.

In the end, while GIs and Tommies fought their guts out to make up for the mistakes of their leadership, the advantages achieved by initial Axis successes were allowed to blow away in the wind by an equally detached and confused Axis High Command. In its case, how to best exploit the results of their initial attack depended on an argument raging within the Italian Commando Supremo and the persuasive abilities of Albert Kesselring and Erwin Rommel. After much discussion and the loss of several crucial days, the Axis decided on the less ambitious plan, which was itself no longer even possible.

Baptism By Fire is the second game in the Battalion Combat Series, which took players by storm with its block buster initial release Last Blitzkrieg. The game is designed as a more accessible entry to the system for those who want something smaller and faster than the earlier monster game. Here the wide open desert, limited number of Formations, and short scenario length provide players with a rapid and fun introduction to the series, the chance to develop their play skills to become a more effective BCS player overall, and to take a good look at this poorly understood battle.

Once again, the masterful order of battle research by Carl Fung showcases the forces involved with more fine detail than ever before. As a result, the common misconceptions of hapless GIs and Afrika Korps supermen are put to rest.

To give players a better feel for the pulse of the battle, the Germans run rampant for a few turns but then must idle back for several more while their commanders figure out what the overall objective will be. The player selects this objective randomly in the middle of the game, and it determines his Victory Conditions. This precludes the Axis player from overusing his limited combat power beforehand (since he might be going down the wrong road, literally) and keeps the Allies off balance as they must protect against both possibilities.

With a campaign game of only 10 turns, multiple plays are readily possible and various strategies for both sides can be explored.