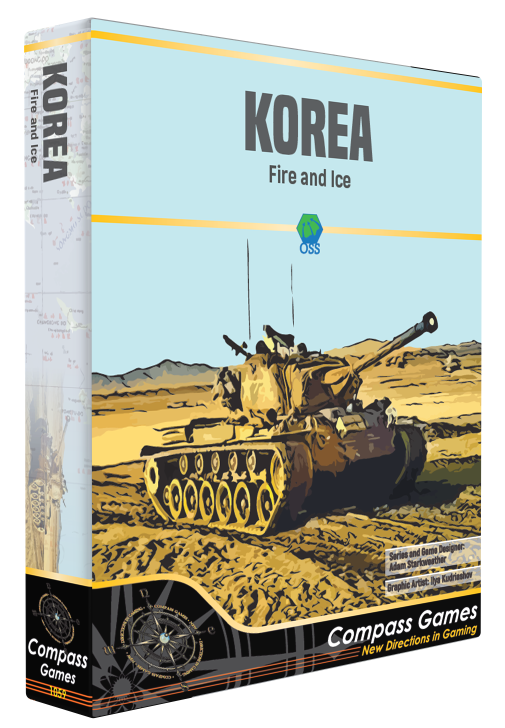 Korea: Fire and Ice is the first game in a new system called Operational Scale System. This system will cover large scale combat from World War Two into the modern era. The scale for the system will be 10 miles a hex and weekly turns, with Divisions as the primary maneuver unit.

Using at its heart a system that is from an older but wonderfully conceived game called “Road to the Rhine”, players will be able to move all their units once but can, if they can afford the supply cost, move the still unmoved units impulse after impulse. The opposing player will have to maintain adequate reserves to counter this.

The grand campaign game covers the first year of the war.

Using a moderately complex rule set, players will be able to concentrate on the play and not the rules. Keeping your units well supplied will be the key to victory – but as you advance, you’ll see your supply situation deteriorate. Detection will also be a key to victory as finding your enemy is vital to defeating him. Also covered are the epic F-86 versus MiG-15 battles, political limitations of surrogate wars, possible Soviet intervention, possible nuclear weapons, and of course, the United States Navy – for both support and invasions.

There are scenarios covering various sized battles and campaigns (with a play time of 2 to 35 hours), as well as a grand campaign game for players that want it all.