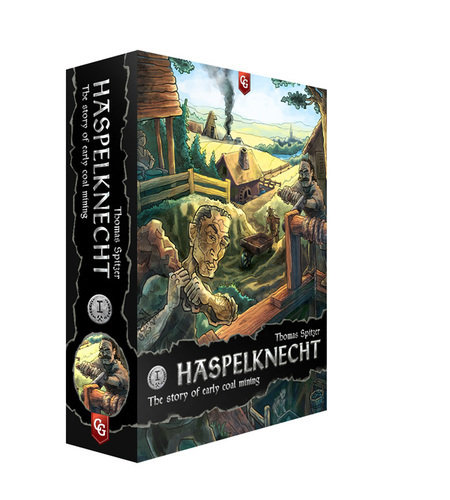 Prepare to embark upon an adventure through time! Discover the history of coal mining in Germany over the course of three board games. We begin with the discovery of coal in Germany's Ruhr valley in the 16th century, a time when the land was blanketed with forests and roads were scarce. A young shepherd who made a campfire in a pit for warmth noticed his fire seemed to burn much longer than usual. The next day, he discovered shiny black stones amidst the ashes, which were still glowing and burning. The boy told the farmer about the stones and, when the work in the fields was done, they dug in the pit together, looking for more. The deeper they dug, the more nasty pit water appeared, making the digging increasingly difficult. Once at home, they discussed the techniques and tools that could be used to get rid of the pit water so they could dig deeper and extract those magical shiny black stones called coal.

Haspelknecht: The Story of Early Coal Mining transports players to the beginning of coal mining in Germany during the 16th century. Players take upon the role of farmers who exploit the presence of coal in their lands in the southern part of the Ruhr region. Coal was discovered here, close to the Earth's surface, during a time where the lands were mostly covered with forests and roads were rare. Players will obtain unique developments, expand their farm, and dig deeper in the ground to extract more coal. Beware of quickly accumulating pit water, for it can stall your efforts and prevent your extraction of valuable coal. The game has many paths that lead to victory.

Haspelknecht: The Story of Early Coal Mining is the first game of Thomas Spitzer's Coal Trilogy. The Coal Trilogy chronologically presents major milestones of Germany's historic coal industry. Additionally, the complexity of each subsequent game in the trilogy will gradually increase while maintaining fluid gameplay, with the most complex game as the final title of the trilogy!