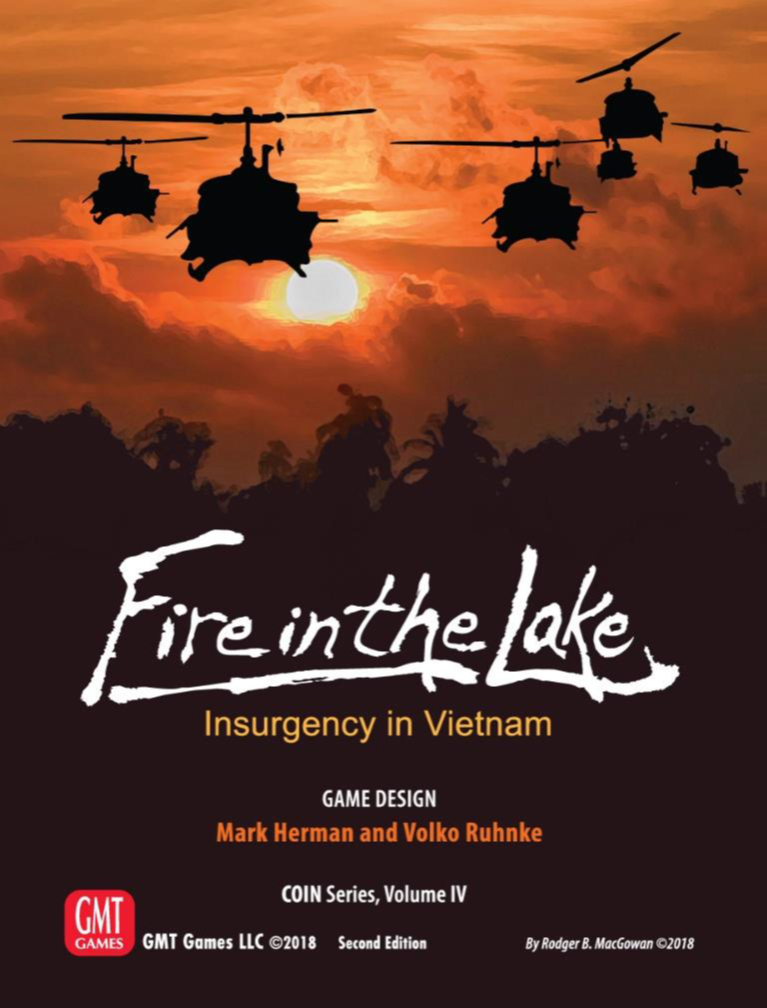 Vietnam, 1964. The most wrenching US engagement of the Cold War would be far more than GI versus Charlie. The conflict had set tribesman against nationalist, Buddhist against Catholic, mandarin against villager, and of course Northerner against Southerner—even among the communists. As revolutionary change burned through that ancient civilization, Washington would apply its armament and its operations research. To get out, the US counterinsurgency would have to motor deeper and deeper in. In the end, culture and will would overcome technology and math and signal the end of the primacy of industrial might in modern warfare.

Volume IV in GMT’s COIN Series dives headlong into the momentous and complex battle for South Vietnam. A unique multi-faction treatment of the Vietnam War, Fire in the Lake will take 1 to 4 players on US heliborne sweeps of the jungle and Communist infiltration of the South, and into inter-allied conferences, Saigon politics, interdiction of the Ho Chi Minh Trail, air defense of Northern infrastructure, graduated escalation, and media war.

Renowned designer and modern warfare expert Mark Herman joins COIN Series creator Volko Ruhnke for a collaborative production not to be missed. Fire in the Lake features the same card-assisted counterinsurgency game system as GMT's Andean Abyss, Cuba Libre, and A Distant Plain, with a pack of twists that take the Series to another level, including:

Each Fire in the Lake faction presents fresh challenges:

As with earlier COIN Series volumes, players of Fire in the Lake will face difficult strategic decisions with each card. The innovative game system smoothly integrates political, cultural, and economic affairs with military and other violent and non-violent operations and capabilities. Terror and subversion, pacification, infiltration, NVA long-range bombardment, road and river ambushes, VC front taxation, aid diversion, US bombing of the Trail, Montagnard recruitment, ARVN Ranger raids, and many more options are on the menu. Flow charts are at hand to run any faction missing a player—solitaire, 2-player, 3-player, or 4-player experiences are equally supported. Ride on up the river.

This is identical to the 2nd Printing, except that any known errata will be corrected.