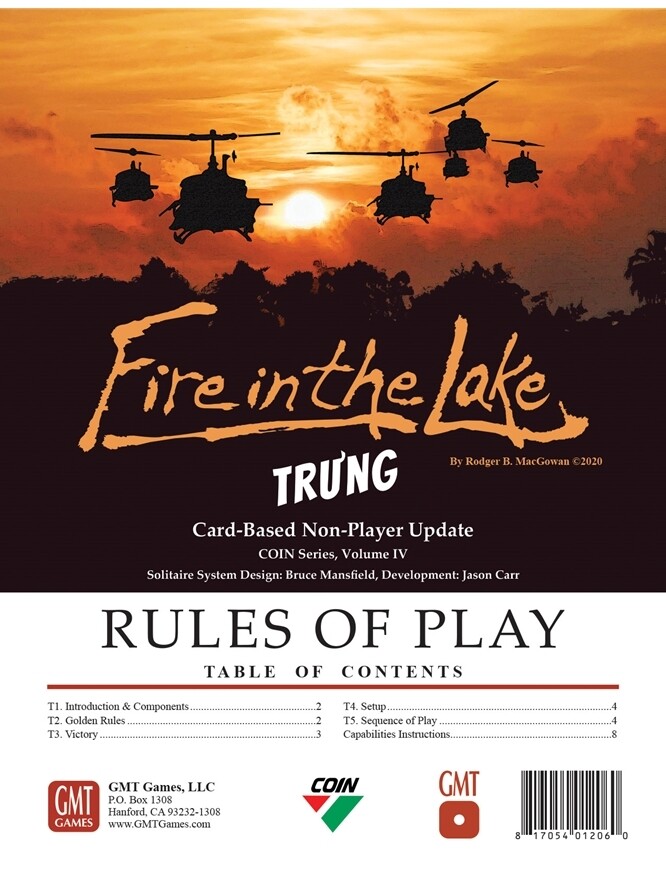 “All the male heroes bowed their heads in submission; Only the two sisters proudly stood up to avenge the country.”

Tru’ng is the name of a new bot system for Fire in the Lake. It follows in the footsteps of the innovative card-based bot system that was first developed for Gandhi, giving fans of Fire in the Lake more opportunities to get this great game to the table.

Tru’ng is quick to use and easy to implement, but is sophisticated enough to play the full Fire in the Lake game. When selecting Operations and Special Activities, cards are drawn from the Tru’ng deck—there are six cards for each Fire in the Lake faction. Each card examines the current state of the game and selects the appropriate action for the active faction. A single, faction-specific table then determines where that action will occur. The same table is used to select spaces for Operations, Special Activities, and Events, minimizing the need to flip between multiple player aids.

Playing against Tru’ng feels like playing against a human opponent. It is unpredictable yet responsive to strategic needs, it goes after its enemies while keeping an eye on its ally, and makes moves up to now limited to human players—like choosing a Limited Operation to block an opponent’s Event. Tru’ng can take the place of a human player for any Fire in the Lake faction, can be used with every Fire in the Lake scenario, and can be used in any combination of player and non-player setups.

In 40 CE, the Tru’ng sisters successfully fought to liberate their homeland from foreign occupation. They defeated the Chinese army that had been sent to pacify the region and for three years ruled as queens. In the past two millennia, the legend of the Tru’ng sisters has grown; they are now celebrated as exemplars of sacrifice and patriotism in defense of their homeland. It was the birth of Vietnamese national identity.

Even the Han emperor heard of it, and was terrified.”