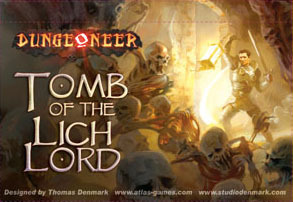 The Lich Lord has returned! And he has released the dead from their wormy graves. Now these undead hordes are stalking the land. The call has gone out for great heroes to stop this evil plague ... are you brave enough to enter the Tomb of the Lich Lord?

Tomb of the Lich Lord is a two- to four-player Dungeoneer card game. Your character explores a wilderness that you build with map cards, while fighting monsters, completing quests, and leveling up along the way. Tomb of the Lich Lord -- the first set for Dungeoneer -- features 110 new Dungeoneer cards, including undead-themed monsters and six new heroes for your Dungeoneer game: Necrowarrior, Necromancer, Dwarf Avenger, Darkling Rogue, Human Paladin, and Elf Sorceress. The expansion sets can be played as stand-alone games or mixed in with the original for more dungeon-delving fun!