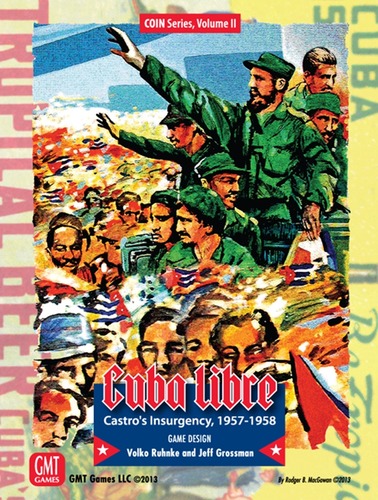 In December 1956, paroled rebel Fidel Castro returned to Cuba to launch his revolution with virtually no political base and—after a disastrous initial encounter with government forces—a total of just 12 men.Two years later, through masterful propaganda and factional maneuver, Castro, his brother Raúl, and iconic revolutionary Che Guevara had united disparate guerrillas and exploited Cubans’ deep opposition to their dictator Fulgencio Batista y Zaldívar.Castro’s takeover of the country became a model for Leftist insurgency.

Following up on GMT Games’ Andean Abyss, the COIN Series next volume, Cuba Libre, takes 1 to 4 players into the Cuban Revolution.Castro’s Marxist “26 July Movement” must expand from its bases in the Sierra Maestra mountains to fight its way to Havana.Meanwhile, anti-communist student groups, urban guerrillas, and ex-patriots try to de-stabilize the Batista regime from inside and out, while trying not to pave the way for a new dictatorship under Castro.Batista’s Government must maintain steam to counter the twin insurgency, while managing two benefactors:its fragile US Alliance and its corrupting Syndicate skim.And in the midst of the turmoil, Meyer Lansky and his Syndicate bosses will jockey to keep their Cuban gangster paradise alive.

Cuba Libre will be easy to learn for Andean Abyss players—both volumes share the same innovative COIN system.Like Volume I, Cuba Libre is equally playable solitaire or by multiple players up to 4—and with a shorter time to completion than Andean Abyss.But Cuba Libre’s situation and strategic challenges will be new.A deck of 48 fresh events brings 1950s Cuba to life and includes …

New twists match the COIN system to the situation in 1950s Cuba:

Cuba Libre provides up to 4 players with contrasting roles and overlapping victory conditions for rich diplomatic interaction. For 2- or 3-player games, players can represent alliances of factions, or the game system can control non-player factions . Or a single player as the Cuban Revolutionaries can attempt to topple Batista and seize power for themselves. The non-player sides will fight one another as well as the players, but too much power in the hands of any one of them will mean player defeat.

This printing is a straight reprint of the 3rd edition (with known errata corrected).