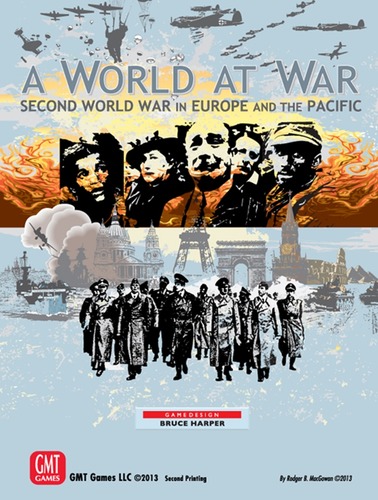 A World at War, 3rd Printing

First published by GMT in 2003, A World at War is a grand strategy game based on the award-winning Advanced Third Reich/Empire of the Rising Sun gaming system. A World at War simulates the military, economic, political, diplomatic, research and production aspects of the Second World War and lets the players find out for themselves what might have happened if:

A World at War continued the evolution of the Advanced Third Reich/Empire of the Rising Sun game system, refining and clarifying the rules in every area of the game. Five years of design and relentless playtesting resulted in a polished, proven game, which includes the following innovations:

Since A World at War was first published the following changes have been added:
A World at War contains a dozen scenarios, ranging from the introductory Battle of the Atlantic and Barbarossa scenarios up to European and Pacific Campaign Games. But dedicated gamers will be hard-pressed to resist testing their luck, skill and especially their nerves by taking on the entire war in the full-fledged Campaign Game.