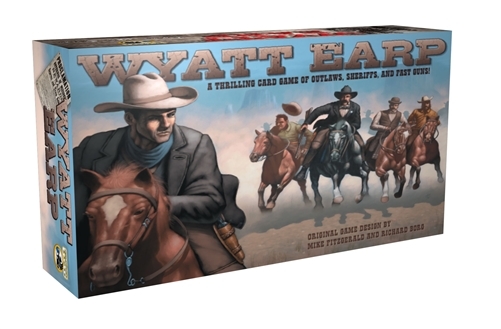 SKU FDD-101465N
$23.99
Out of stock
1
Product Details
UPC: 609456647113
Publisher: Eagle-Gryphon Games
Players: 2-4
Age: 8+
Time: 30-45 minutes
Made In: China
Designer(s): Richard Borg & Mike Fitzgerald
The aim of the game for each player is to earn the most money from capturing famous outlaws. 2 to 4 players take up the roles of Sheriffs who are hot on the outlaws tails, trying to capture the outlaws with most rewards on their heads.
The Wild West! Tough times and tough characters! Bandits, desperadoes, rustlers and thieves are everywhere. Take the rolls of the brave sheriffs riding on the heels of these legendary outlaws. Capture Jesse James! Hunt Butch Cassidy and the Sundance Kid! Rich rewards await those brave and daring enough. Just don't let them slip away...

In Wyatt Earp, the players are bounty hunters who work cooperatively and competitively to try to capture the most notorious outlaws of the old west. They do this by collecting and playing sets of cards for the various outlaws. When a player plays a set, he both adds to the reward and improves his chances for collecting the reward for that outlaw. At the end of each hand, players collect money for the outlaws that they helped in capturing. After several hands, the player who has collected the most money in rewards is the winner!