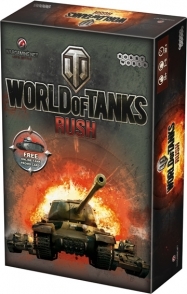 A squadron of tanks rumbles across the field of battle to assault the enemy stronghold. Wily commanders recruit the strongest and smartest to carve a swath of destruction across the homelands of those who oppose them. Powerful tanks from all over the world meet to do battle in World of Tanks: Rush.

Players will start with a simple set of barracks cards and race to build the best deck of tanks and armored vehicles. Use the abilities of your tanks to manipulate the field to your advantage, or press those tanks into service and send them to destroy the opposing bases. A thrilling deck-building game with plenty of action, World of Tanks: Rush will leave everyone begging for one more game.

100 tank cards (25 each from Russia, Germany, France and the US), 48 medal cards, 30 barracks cards, 12 achievement cards, 15 base cards, 5 reference cards, 1 first player card, 1 tank graveyard card. Plus a free promo code for a tank to be played on the World of Tank online game.