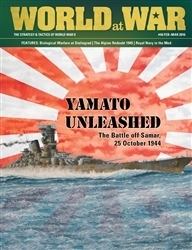 Yamato Unleashed: an analysis of the decisive 1944 aero-naval Battle of Leyte Gulf from the Japanese perspective.

Yamato Unleashed. US forces returned to the Philippines in October 1944. In a desperate attempt to halt the US landings, the remnants of the Japanese fleet sortied. While the last carriers, with only a few planes between them, drew off the massive US carrier strike force, a flotilla of Japanese battleships and cruisers descended on the American invasion fleet in Leyte Gulf. As the Japanese ships rounded the island of Samar, they ran into two task forces of US escort carriers.

Yamato Unleashed picks up the action at this point. The Japanese player must push through the carrier groups and get heavy ships off the edge of the map, where they will find the American transports. The US player must fight for time, using carrier aircraft and light vessels, destroyers and destroyer escorts, to delay the Japanese until a squadron of US battleships arrive to even the odds. Historically the Japanese turned and ran; it might not work out that well this time.

Each counter represents a single ship, or a fighter, dive bomber, or torpedo squadron, each hex is a nautical mile, and each turn is 12 minutes. Ships are rated for main guns, secondary guns, torpedoes, armor, speed, and maneuverability. Hits can cause general damage, start fires, slow a ship, or cause a catastrophic explosion. Simple mechanics and a quick combat resolution keep the game moving.