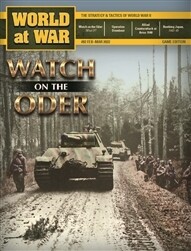 World at War: Watch on the Oder

Watch on the Oder: January 1945 is a hypothetical two-player game allowing the players to examine the strategic possibilities inherent in the campaign that may have taken place had Hitler decided to send the forces he used historically in the Ardennes to the eastern front. Both sides’ orders of battle are entirely historic within that context. Each of the eight game turns represents four days, and each large hex on the map equals 20 miles. The map runs from the Oder River on the west to the Riga-Pinsk line on the east. Units are German corps and Soviet armies. The turn sequence is I-Go-U-Go, but both players decide if their force will move and fight or fight and move. Playing time is about three hours, and is easily adapted for solitaire play. Complexity is low-medium. The German has to strike hard and fast at the beginning in order to weaken the inevitable Soviet counteroffensive.