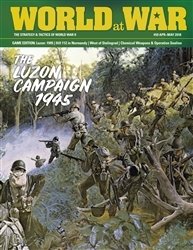 The Luzon Campaign, 1945 (LC) is a wargame, purpose-designed for solitaire play, which covers the fighting across the main Philippine island of Luzon early in 1945. The first turn represents one week, each turn after that represents half a month. Each regular hexagon represents 6.75 miles (11 kilometers) from side to opposite side.

You, as the single player, actively commands the invading US forces, while the rules direct you in the deployment of the defending Japanese. You win or lose via the seizure of (or failure to seize) key areas on the map. You are cast in the role of US Sixth Army Commander Lt. Gen. Walter Krueger. In turn, you’re under considerable time pressure from theater commander Gen. Douglas MacArthur (portrayed passive-aggressively by the victory conditions and six-turn limit) to be finished with the major portion of the campaign no later than the end of March. That’s necessary to allow the redeployment of major aero-naval assets for the Iwo Jima and Okinawa battles.