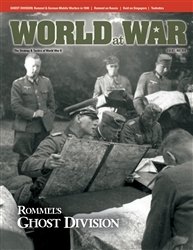 Ghost Division: before Erwin Rommel became famous in Africa, he made his original name commanding 7th Panzer Division in the 1940 campaign against France.

Ghost Division is a solitaire game in which you, the player, takes command of General Erwin Rommel’s 7th Panzer Division during the drive across Belgium and France in those heady days of May and June of 1940 (there are four German formations in the game that drive the events of play: The 7th Panzer Division, a regiment of the 5th Panzer Division, a regiment of SS-Totenkopf Division, and the 15th Motorized Corps’ non-divisional units, also representing OKW non-divisional units). Each has a separate colored unit box for ease of identification. The Allies are controlled by the game system. As the player, your objective is to drive as far as possible, cutting off the Allied armies in Belgium and possibly preventing the Dunkirk evacuation, thereby gaining a great victory for yourself.

As your forces drive across the map, they will encounter various Allied Forces, represented by face down Fog of War and Allied Formation counters. When encountering an Allied Formation, play temporarily stops in order to resolve the Combat Sequence, with the game system generating forces that your own forces will have to defeat.