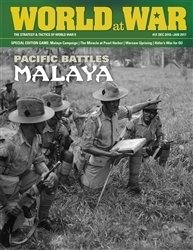 Pacific Battles: Malaya is a wargame series of several campaigns in the Pacific Theater of Operations in World War II. The system emphasizes the operational level of these campaigns, and deals with land and air operations. This is a two player game. One player controls the Japanese, the other the Allies. Pacific Battles Malaya is the fourth game in this series, and it covers the entire land-air campaign for the lower peninsula of Malaya, and the city of Singapore, December 1941 to February 1942. The other games in the series are Guadalcanal (#23), Nomonhan (#32), and Shanghai (#42).