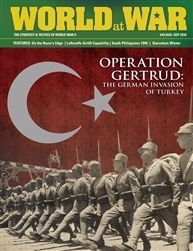 World at War: Operation Gertrud - The German Invasion of Turkey

On the Razor's Edge - Turkey in World War II: Turkey remained neutral until the end of World War II by adroitly playing off the Axis and Allied Powers. They, in turn, wooed the Turks with economic and military incentives to join their respective coalitions.

Operation Gertrud: The German invasion of Turkey is a speculative two-player wargame about a German invasion of Turkey during the Second World War. The historical course of events during World War II precluded any likelihood that the Germans would invade their erstwhile ally, it is conceivable that a different turn of events could have precipitated a German Blitzkrieg into Turkey. The Turks were concerned about this possibility and they endeavored to remain neutral during the war. Unlike the First World War, the Turks could not hope to hold Istanbul in the event of a war, and any incursion by one side (Axis or Allied) would certainly invite an incursion by the other. The Turks were most concerned about Soviets, but if Hitler had conceived a notion of invading Turkey, the Germans' most daunting challenge would be the Allied response, not necessarily the Turkish Army. The Turks had been underestimated during the previous world war, and so it’s anyone’s guess how well they could have faced up to the Wehrmacht and Luftwaffe.