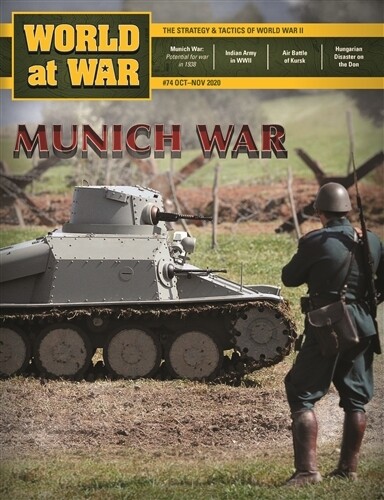 Munich War 1938 is a two player operational level simulation of a hypothetical World War II in Europe that began in the fall of 1938. The assumption is that the British and French governments did not back down at the September 1938 Munich conference when Hitler demanded the Sudetenland from Czechoslovakia and instead went to war with the Third Reich. The ensuing conflict finds the powers partially prepared for war. The objective is for each alliance to seize a position from which it can then dominate Europe in the ensuing war.

In Munich War one player commands the Axis, controlling Germany and the countries aligned with Berlin. The other is the Allied player, who controls the anti-German forces. Each hex on the map represents 65 kilometers or 40 miles. Units are at the corps and army level. Each game turn represents one week of operations with the game covering the first two months of the war.