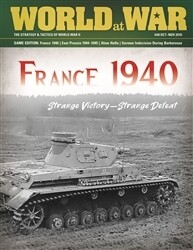 France 1940 is a two player game that allows players to examine the strategic possibilities inherent in the campaign that occurred within France and the Low Countries in that year. A second scenario allows for an alternative history examination of the opportunity the French had in September 1939 if they had kept their promise to launch a major offensive into Germany within a week after that nation invaded Poland.