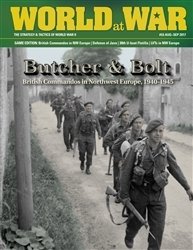 Butcher & Bolt - British Commandos in Northwest Europe, 1940-1945 : The withdrawal of the British Expeditionary Force from France in 1940 came with no prospect of an immediate return to Europe. To continue their war with Germany, the British formed a commando force to conduct raids against German-occupied territories.

Commandos: Europe puts you in charge of a team of commandos operating in Europe (and North Africa) during WWII. Your duty is to lead your men on a variety of randomly generated missions (representing orders direct from high command), choose weapons and equipment that are best suited for the mission, decide on how to posture your team, plan your approach, and a method of extraction. However, it is not quite that simple; you must choose weapons and equipment that will be the most efficient utilization of very limited resources; your goal is to disrupt the enemy’s freedom of action in your area of operations with a minimal “footprint” and minimal cost.