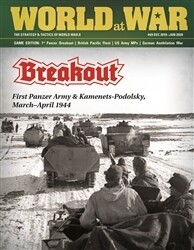 Breakout: First Panzer Army is a two player game that allows players to examine the operational challenges in the battles between the Soviet and German Armies in the northwest Ukraine in March and April 1944, leading to 1st Panzer Army Pocket.