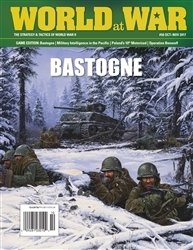 Bastogne (Solitaire) is a wargame covering the German siege of the town of Bastogne during the Battle of the Bulge, specifically the period 18-26 December when the town was surrounded. Bastogne Solo is based on Dien Bien Phu (Modern War #17), but there are some significant differences.

You (the player) command US forces, while the game system controls the Germans.

The game is a race against time. You must hold out until relieved by Patton’s Third Army. If not, the Germans take the town and possibly gain a better outcome for the Battle of the Bulge.

While a Solitaire game, Bastogne can also be played by two or more players, each taking charge of different aspects of the US defense, for example, one player can be overall commander; others command various defensive sectors, and another take charge of air and artillery.