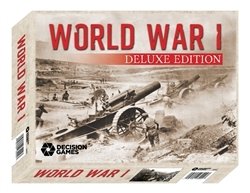 World War I Deluxe Edition. This update of the S&T#294 issue game will include a Mounted Game Board, and an update of the counters and rules.

World War I originated in a combustible mix of dynastic ambition, nationalism, and misplaced confidence in a short war. Europe was an armed camp with mass armies formed by conscription and national reserves. Antagonism, fear, and suspicion drove nations into a lacework of alliances. Sarajevo provided the spark that set it off, and in a matter of days the continent was at war, with empires in the balance.

Mobilization Points are used to build new units, absorb combat losses, and purchase campaign markers allowing additional activity in chosen sectors. They are always in short supply, increasingly so as economies shrink over the course of the war. Neutrals, wooed by diplomacy, may bring fresh strength to bear.

The main scenario covers the entire war from 1914-1918 in ten turns, while short scenarios handle the opening phase of the war (two turns) and the final great battles (four turns). Options include free setup in 1914 and an extension of the war into 1919. Victory comes from wearing down an opponent, either by capturing essential locations or by exhausting mobilization points. In the game as in the war, battle is sometimes necessary for its own sake.