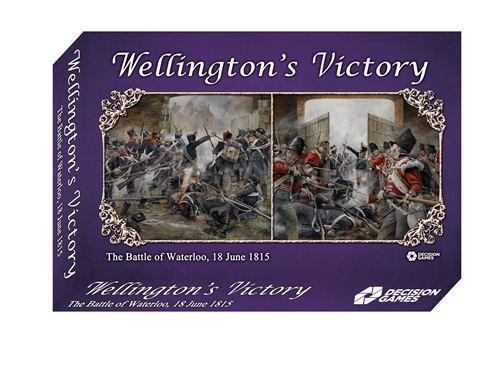 The classic SPI game covering the battle of Waterloo returns in this revamped version. Napoleon's French Army of the North faces Wellington's hodge-podge Army of the Low Countries , who are fighting for time while awaiting the arrival of Blucher's Prussian Army of the Lower Rhine. The maps use natural contours to show elevations, with terrain features including the critical chateaux, villages and farms, walls, woods, hedges, sunken roads, slopes, streams, and marshes. Most of the vividly colored counters represent combat units: infantry battalions, cavalry squadrons, artillery batteries, and engineer detachments. Many battalions have additional counters for specialist skirmishers, or additional counters to represent greater size. Unit capabilities are modified by a number of formation markers, from infantry squares to cavalry vedettes. Individual leaders enhance unit performance, while each army's high command is represented by key commanders and unit headquarters. The game mechanics have been streamlined; a single dice roll inflicts casualties and disorder. Units and larger organizations wear down over time and must be rested or risk a catastrophic collapse. Finesse trumps brute strength in combat; players must utilize a variety of arms, formations, and tactics to seize key ground and destroy enemy units. Hidden movement allows each player to prepare surprises for the other. Multiple scenarios cover everything from the historical battle to a fight for an individual chateau. The French player may decide on an early start, or even on turning the battle into a demonstration. The Prussian arrival can occur early with fewer troops, or later with more, at the will of the allied player. It's all here, from massive cavalry charges to grand bombardments to skirmishing to wild melees, with the fate of Europe in the balance.