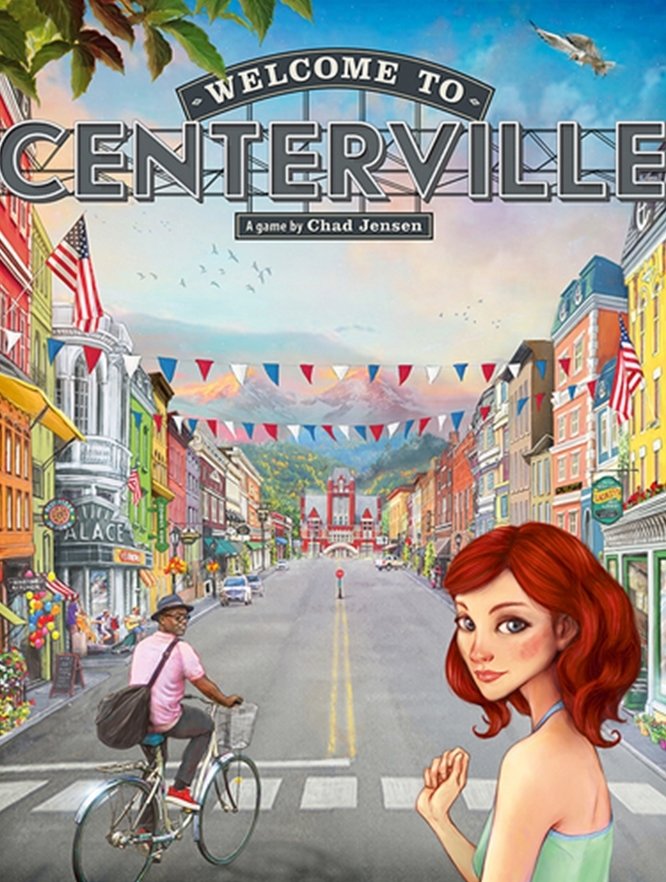 Players act as entrepreneurs, tycoons, politicians and other local movers and shakers working to develop a modern urban area. Fortunes will be made and fame will rise. As time goes by, personal milestones will enrich the players even further.

Throughout the game players will roll six dice, keeping some and rerolling others, then implementing the various die faces on the game board. This will result in political offices gained and lost, new vocations learned, acquisition of new land, or the erecting of new buildings.

The end result will be a vibrant community that is revered near and wide — but only the player who has best balanced his wealth and prestige will emerge the final victor.

The board comprises four quadrants of play: the town proper, the political offices, the available vocations, and the surrounding greenbelt. On his turn a player rolls six dice, setting aside all, some or none while re-rolling the rest (up to a total of three rolls), then implements the results of the dice in the different areas on the board. Each area offers the players opportunities to score wealth and prestige in various ways.

Time moves onward, out of the control of the builders of this small community. An hourglass icon on a die moves the round marker one space up the time track. An hourglass can’t be rerolled, but that player gains a compensatory “milestone” which can be used during one of the three scoring rounds in the game.

The town quadrant is further divided into four colored zones and a central park space. Two of the colored zones generate wealth, the other two prestige. Construction icons on the dice are used to construct buildings in town. Buildings range in value from 1 to 3 points and the player(s) with the greatest total value in a zone gains the wealth or prestige during scoring rounds. Control of the central park provides a player with +1 value in each of the four town zones. The park bench icon found on the green die is used to take control of the central park.

In the greenbelt quadrant players accumulate potential investment by proceeding along a numbered track, but will only score for those investments if they also have developments in the field and/or lake spaces. Each tree icon on a die can be used to move forward along the greenbelt track. Three trees combined are used to create a field or lake development.

Vote icons on the dice allow a player access to the political offices. Out-voting an opponent will oust them from an office as you take it over. When acquired during play, each office provides a unique minor bonus. During scoring rounds politics will generate both wealth and prestige for players who hold multiple offices. A player devoid of political offices during scoring will lose wealth and prestige.

In the final quadrant, six random vocation tiles are available to choose from each turn (while supplies last). Rolling the education icons allows a player to take one or more vocation tiles. Collecting different vocations will score a player wealth, collecting sets of the same vocation will gain the player prestige. The payouts can be lucrative, but unlike the other board areas, vocations are only assessed during the third and final scoring round.

Fate, as always, has a hand in man’s affairs. Rolling a fate icon on a die allows a player to add that die to a different icon to increase its value. Alternatively, two fate paired together can be used for a modest gain in wealth or prestige, while four fate can presage a disaster for your opponents.

Scoring is performed at the end of each of three rounds of play. The offices, town and greenbelt score every round, vocations only during the final round. Collected milestones may be converted to either wealth or prestige. When all is said and done, each player assesses where his wealth and prestige markers are on the scoring track: the lower of the two is his final score – so careful consideration between balancing wealth and prestige throughout the game is vital to a winning strategy.