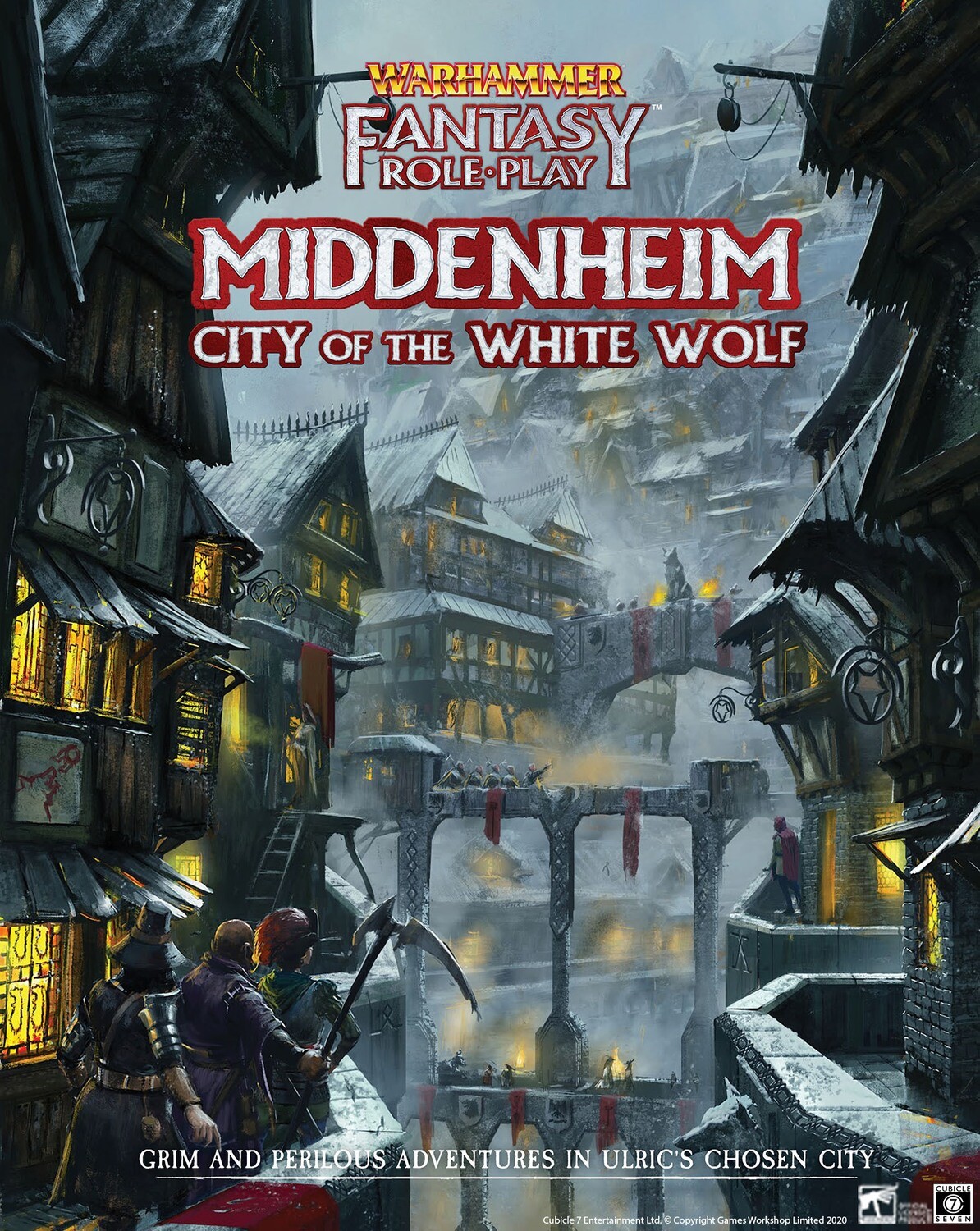 Famed for its impregnability, set atop the mighty Fauschlag, struck flat by Ulric’s fist, Middenheim commands authority over all who stand beneath its towering presence. Hewn from living rock by peerless Dwarf skill, it is a striking fortress city where Ulric, the God of War, Winter and Wolves, reigns supreme. The sacred Eternal Flame burns pure and bright, in the heart of a city famed throughout the Old World, riven by dark cults, clambering merchants, and seditious schemers. Middenheim has little room for heroes, and less time for wasters, but for canny opportunists with the will and grit to carve a small piece of something better? Well, they might stand a chance.

Middenheim: City of the White Wolf takes players out of the familiar Grand Province of the Reikland, and drops them in the centre of Ulrican influence and power in the Old World. Middenheim sits at the heart of the Empire’s Northern expanse, and is the perfect setting for endless grim and perilous adventure! Each district of the expansive city is carefully detailed, with locations, plot hooks and NPCs too numerous to list. A beautifully illustrated map, provided with both GM and Player versions, shows off the city in exquisite detail. Need an Inn in the Altmarket? A Pawnbroker in The Kleinmoot? Details on the Kisvilite Embassy? Middenheim has everything you require.

Middenheim: City of the White Wolf distils the best of previous writing on the chosen city of Ulric, and combines it with new creatures, new NPCs, new locations, and rules to create the ultimate sourcebook for groups wishing to adventure in Middenheim and its surrounds. Full rules for creating Middenheimer, Middenlander and Nordlander Characters are included, along with a new career for true devotees of Ulric.

A stand-alone book, Middenheim: City of the White Wolf also makes an excellent supplement for those intending to run Power Behind the Throne, part three of The Enemy Within campaign. While the companion content is very focused on the events of Power Behind the Throne, this book provides more details on the city for GMs who are happy to let their groups explore more widely. It details Middenheim around 2512 IC, prior to the events of The Enemy Within, but includes an appendix with updates on how future events are set to alter the city.

Middenheim: City of the White Wolf is an excellent and entertaining addition to any gaming table. Packed with lore, NPCs, and exciting adventure hooks, it will kickstart your next adventure in Warhammer Fantasy Roleplay!