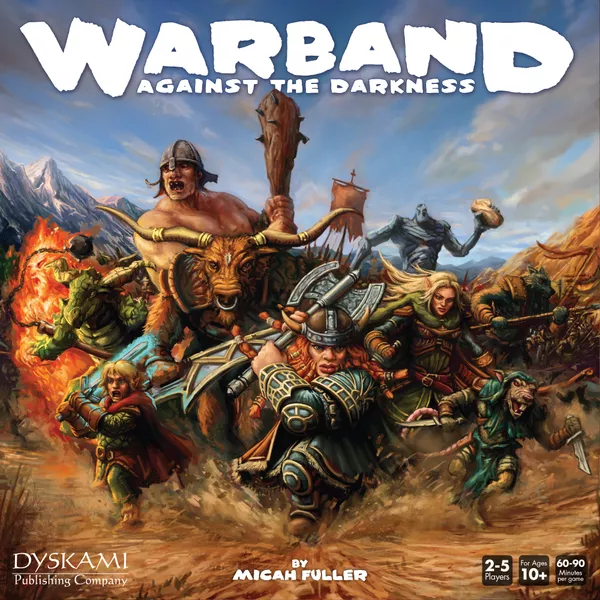 Warband: Against the Darkness (DING/DENT-Light)

Since the dawn of their civilizations, the great races of the Five Realms of Kholdrum, Shenaru, Ela'Vethera, Lorendale, and Zhoni have been engaged in complex relations with each other – allying and arguing, merging and dividing, loving and hating – as they each schemed and plotted to gain the upper hand over the others.

Then the Darkness came. An army of unspeakable horrors of an ancient and forgotten race of infernal creatures awoke deep within the earth and marched across the lands. The Darkness ravished the Five Realms with death and destruction and nearly brought the continent to its knees. Faced with a desperate fight for their very survival, the great races put aside their differences and united into a warband of such magnitude and strength as had never been seen before. The world trembled.

Though their great loss of life on the battlefield was nearly insurmountable, the warband's sheer size overpowered the armies of Darkness and largely drove them back beneath the earth. Sorcerers and shamans and magi of the great races invoked binding blood magic to start sealing the enemy away for an eternity. In the final days of battle to determine the fate of the lands, the hordes of Darkness and the great warband clash on four remaining battle fronts that are each located near a border landmark that separate the kingdoms of the Five Realms.

The last four campaigns wage on. The end is near. May the Maker protect us all....

As a player in Warband: Against the Darkness, you control the warband armies of one of the great fantasy races of the Five Realms. Although the great races are currently working together in mutual defense, old habits and rivalries are hard to break and this isn't in any way a co-operative game. It's important that your kind emerges victorious from the war with more battle prestige and honor than your temporary and untrustworthy comrades. The player who collects the most Victory Points of one-upmanship for their race by the conclusion of the final battle against the Darkness – gained by advancing your soldiers in the warband, earning gold for your army captains, reconnoitering the combat fronts with your scouts, and defeating enemies on the battlefields – has achieved the greatest leadership glory and is declared the winner.

Warband: Against the Darkness is perfectly balanced in the design space between Euro and Ameri-style gameplay, combining strategic depth with an evocative fantasy theme and tense player conflict.