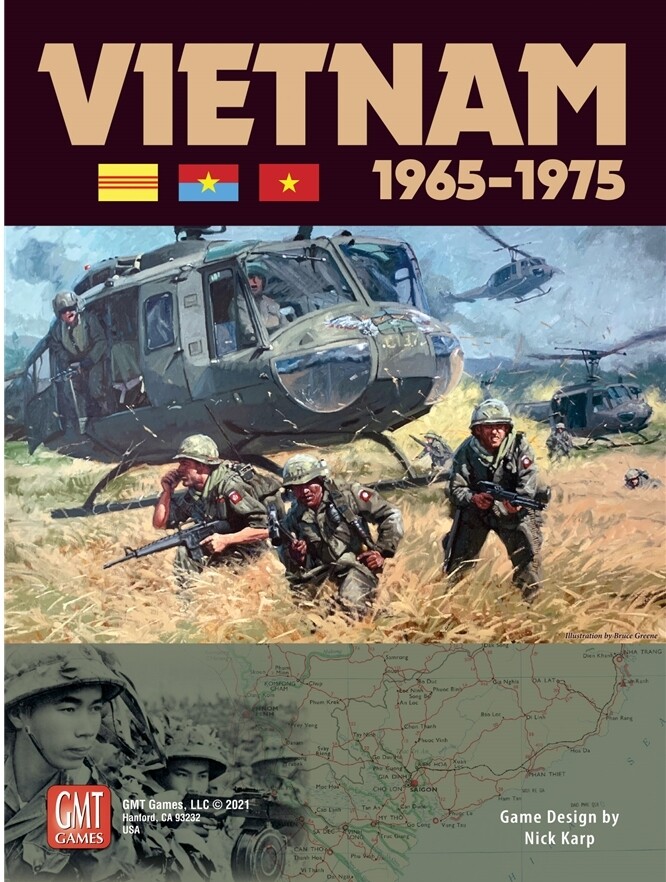 "This simulation game re-creates the longest, most complex, and least understood conflict in US history in all of its military and political aspects. The rules include detailed treatment of movement, terrain, search and destroy operations, special operations, firepower, airmobility, riverines, brigade-level formations, limited intelligence, and auxiliary units in each scenario..."

That's the blurb from the back of the original Victory Games edition of the game. This game has long occupied the top spot in many gamers' lists of favorite Vietnam games. GMT Games is excited about the opportunity to get a new version of this classic back into print.

If you're not familiar with the original game, there are several small scenarios and a couple of campaign games. Each year is divided into four seasons (Spring, Summer, Fall, and Winter), and each season has two turns (so, roughly 6 weeks per turn). The map scale is roughly 6 miles per hex and units are, generally, battalions or regiments. During the operational phase, players take turns (who gets to operate is determined by the NLF player) conducting operations with their units to destroy the enemy, clear the roads, take towns and cities, or just reposition units. In the Campaign Game, during Seasonal Interphases, each player decides whether and how many additional units and/or resources to bring in to the fight. The game features hidden VC units, airmobility, riverines, national morale, pacification, ARVN effectiveness, and many other nuances that allow the player to grasp the some of the experience of what it might have been like to conduct the war in Vietnam.

Word from the Developers

For many of you, as for us, the mere existence of this announcement is a dream come true. That we get to work on it is just icing on the cake.

Vietnam 1965-1975 has always represented the quintessential grand operational Vietnam game for us. The systems all work together beautifully to evoke the feel of the war whether playing the focused scenarios or the sweeping breadth of the campaign games. To that end, let us tell you what to expect with this reprint edition.

But first, we want to let you know what this reprint is not: it is, most emphatically, not a reimagining of the game. There will be no major rule changes. No chrome will be added. Although we are well aware that the available historical record on Vietnam is vastly expanded since the original publication, the game has always been an abstraction of the conflict as opposed to a meticulously exact reproduction of every fact. The intent with this edition is to clarify where needed and change only if necessary.

With that said, let's get on to the good stuff! The primary goals are to bring the components up to a modern standard and to clean up any ambiguity in the rules. This will be done using both the collected wisdom of the community as well as Nick's input through close consultation as to his original intent on some of the thornier questions.

We're increasing the hex size on the map which will force us to move to three maps, but that's so we can accommodate making the unit counters bigger: 9/16" for units counters while informational markers remain at 1/2". And of course, there will be plenty of player aid cards. There will be 12 PACs in the box including a two-sided CRT/TEC for use during the season, an 11x17 fold-out for use during the Seasonal Interphase, and an 11x17 Operational Flow Chart that details each type of Operation.

With this we will bring this game back in to print and breathe new life into it.