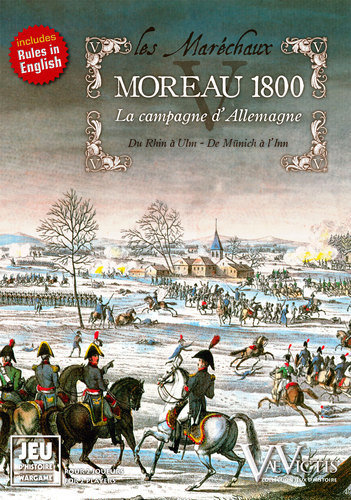 The Marshalls V is a complete game from the series The Marshals, designed by Denis Sauvage. It covers the campaigns of spring and autumn 1800 that took place in Germany from the crossing of the Rhine to the banks of the Inn.

General Moreau, whose successes would later be overshadowed by those of Bonaparte in Italy and the improbable victory of Marengo, is at the heart of this initiative. In six months, he manages to force back Kray’s and then the Archduke John’s Austrians from France’s doorstep to the confines of Bavaria with the culminating decisive battle at Hohenlinden. The three first scenarios describe Moreau’s entrance into the campaign with the hazardous crossing of the Rhine, the gruelling march through the Black Forest, the concentration of the three army corps from Sainte-Suzanne, Saint-Cyr and the army reserve coinciding with the flank assault from Lecourbe’s corps, the counterattack of the Austrians under Kray, and the undecided battles of Engen, Molßkirch and Biberach. The French must demonstrate their resourcefulness as Bonaparte grows impatient and demands reinforcements from Moreau to support his offensive in Italy. Time is running out; advance in the direction of Ulm before the order arrives for the troops to depart toward the south.

The three scenarios that follow relate the events in Bavaria that lead up to the clash at Hohenlinden in deplorable weather. The Archduke John, propelled by his ardour, decides to assault the French at Münich while the latter marched toward them. This battle of encounter is decisive, contrary to the battles of the spring. With this victory, Moreau succeeds in bringing to an end this war with Austria.

With this new volume, the series The Marshals continues to evolve. The experience of playing numerous games as well as the requests of fans of the series led to minor adaptations integrated into the general rules as well as the addition of new optional rules.

Will you fare as well as General Moreau and succeed in competing with Bonaparte’s rising star?