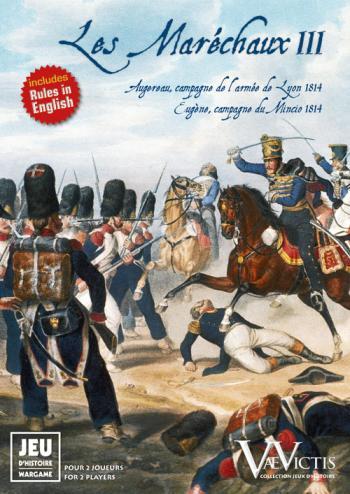 The Marshals III covers the campaigns of winter 1814 that took place in France north of Lyon and in Italy on the Mincio. These theatres of operation are considered to be minor since they occurred far from the Emperor’s view who was engaged in the north of France. Nevertheless, important and little-known battles took place there where the young Marie-Louise, the conscripts of the French army, displayed extraordinary courage. The first campaign, that of Marshal Augereau in France, recounts in three scenarios the march on the flanks of the Austrian army engaged against Napoleon.

In the first, the “Lion of Castiglione” must seize Geneva to cover his march on the enemy lines of communication. The second relates the Austrians’ offensive return from Dijon and the fall of Lyon after the battle of Limonest. The third covers the whole campaign from the beginnings of Augereau’s timid offensive to the loss of the “capital of the Gauls”. The second campaign, led by Eugène de Beauharnais, describes the fierce combats for the supremacy of northern Italy. Threatened at his rear by the betrayal of Murat who is moving up from the south of the “boot” with his Neapolitans, Eugène withdrew from Verona to Mantua. The first scenario, very brief, simulates the about-turn of the French on the Mincio to counter the Austrian advance. The second covers the whole campaign from the evacuation of Verona to the victories of Eugène against various enemy threats.

With this new volume, The Marshals series evolves. The more imposing strengths of these campaigns required some adaptations that allowed for simulating the march of an entire army corps. These new rules are compatible with the previous modules with some minor adaptations.