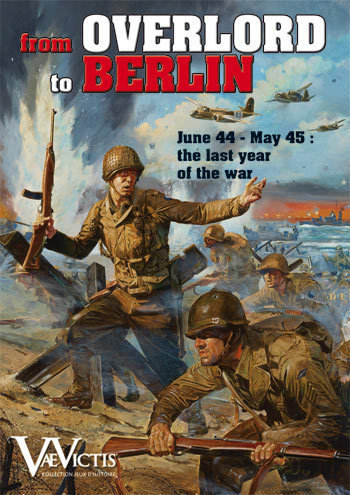 On June 6, 1944, Overlord, the biggest military operation ever launched, began along the Normandy beaches with the landing of two Allied armies. On June 22 in Byelorussia, more than a million Soviet soldiers swept against the German Army Group Centre: the Allied counter-offensive was underway and would not stop until it reached Berlin.

From Overlord to Berlin is a strategic wargame that simulates the end of the Second World War in Europe on all fronts: east, west and Italy. One player directs the Axis forces and must resist Allied pressure for as long as possible while the other directs the Soviets and the Western Allies and must wipe out Nazi Germany and its satellites before the end of the game. The simulation begins in June 1944 with the Normandy landings, the fall of Rome in Italy and Operation Bagration in the east. There was still hard fighting ahead including crossing the Rhine and pushing forward into the heart of the Reich, surrounding numerous armies in the Ruhr and reaching the Elbe.

In the east, Hitler’s counter-attacks in Hungary and in Poland accomplished nothing against the might of the Russian bear. At the beginning of January, Russian troops attacked along the Vistula and drove the Germans back to the Oder. Budapest fell in February, and Vienna was captured in April. Finally, the offensive on Berlin began in April and the Reich fell at the beginning of May 1945, putting an end to the Second World War in Europe.