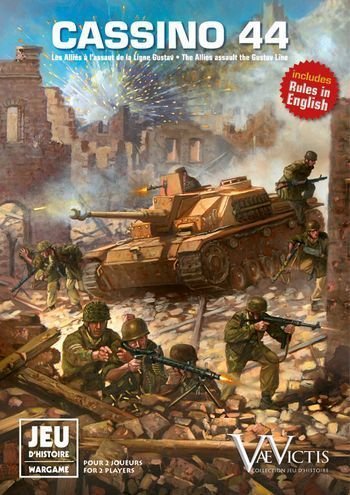 On May 11, 1944 at eleven o’clock in the evening, nearly 2000 cannons opened fire on the German defenses of the Gustav Line. The French, under the command of General Juin (CEF), and the Polish, Canadians, Indians and British, under General Leese, (8th Army) launch an assault to open the road to Rome while the Americans under General Clark (5th US Army) carry out a support attack on the Tyrrhenian coast.

Operation Diadem follows the unsuccessful attacks on the Gustav Line during the winter of 1943-1944. Confronted by the Allies, the German units remain determined and give up nothing. In the town of Cassino and around the monastery of Monte Cassino, totally destroyed by February’s massive bombardments, the green devils of the 1.Fallschirmjäger-Division, supported by mountain troops, will defy the assailants until the night of May 17-18. In this game, VaeVictis takes you to the assault of the Aurunci Mountains. The French troops will have to infiltrate as Juin had imagined. The game also captures the harshness of the hand-to-hand combat between the Polish, British and German paratroopers. In the Liri Valley, the breaches allow the Canadian and British armored forces to be quickly launched on the road to Rome.