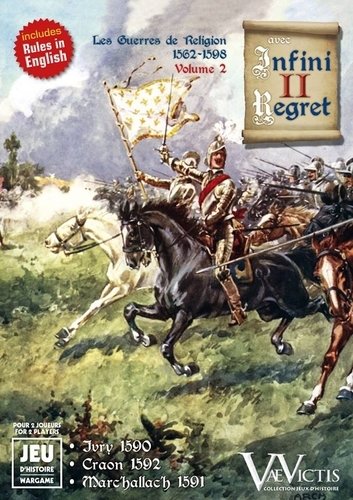 Ivry 1590 - March 1590, Paris has been under siege for a year by Henry IV and is on the brink of famine. To increase the pressure on Paris and Normandy, Henry IV lays siege to Evreux as well. The Duke of Mayenne, lieutenant general of the kingdom of France for the League, decides to go meet the Royalist army. The clash occurs on the great prairie of Ivry where the king makes his famous speech about his white panache during the charge against Egmont’s Spanish lancers.

Marc’hallac’h 1591 - After the entry into the League of the governor of Brittany, Philippe de Mercœur, Henry IV replaces him with the Prince of Dombes. But he is unable to drive out Mercœur and prompts a muddled situation with neither side holding a clear advantage. Things seemed to change with the arrival of 7000 Spaniards for the League and 2400 British for the Royalists. During 1591, the Royalist army and that of the League would have several occasions to come undone as on the Marc’hallac’h...

Craon 1592 - Early 1592, the majority of Brittany is in the hands of the League under the command of the Duke of Mercœur with the help of a large contingent of Spanish troops. To stop his progress, Henry IV asks the Prince of Dombes to seize the town of Craon at the intersection of Brittany, Anjou and Maine. He is joined in late April by the Prince of Conti’s troops. On 22 May, Mercœur’s vanguard arrives in view of Craon and drives out the British outposts…