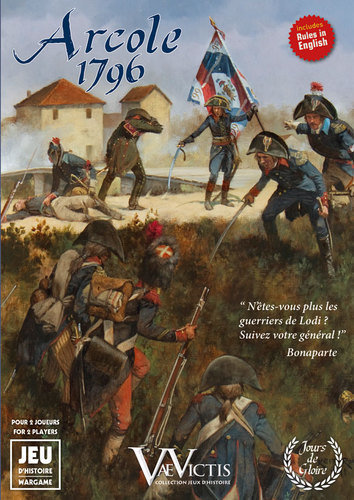 Arcola 1796 is the 41st battle in the Jours de Gloire series. The battle was fought during three days, from November 15-17, 1796, and is simulated in three independent scenarios and a campaign game, taking into account the strategic situation in which the fighting occurred.

Despite his partial check at Caldiero on November 12, 1796, Bonaparte resolved to take the offensive again and try to defeat the Austrians before they could reunite their armies. On the night of November 14, thanks to a wide turning maneuver to the south, Bonaparte crossed the Adige with 19,000 men to surprise the rear guard of Alvinczy’s army of 24,000 men situated around Arcola.

On November 15, the French were halted by the very strong defenses of the bridge crossing the Alpone in front of Arcola. The marshy terrain prevented practically any maneuvering. The bridge had to be taken, but the successive assaults launched by the young General Bonaparte were repulsed one after another. But the threat that Bonaparte presented to his rear obliged Alvinczy to concentrate his reinforcements in that sector on November 16. Finally on November 17 an attack launched by General Augereau overcame enemy resistance, and the French at last crossed the Alpone, forcing Alvinczy to retreat toward the northeast, having lost 6,000 men and the initiative as a result of these operations. Bonaparte’s losses amounted to 4,500.
Indecisive and confused, the Battle of Arcola still came to symbolize a Bonaparte protected by his lucky star and leading his men over the bridge at Arcola under enemy fire.

Arcole 1796 is a highly unusual game in the Jours de Gloire series, due to the nature of its terrain. In an environment of marshes and rice fields, numerous dikes had been constructed. Their initial purpose was to protect the region from flooding by the Adige and Alpone Rivers, but they also came to be used as a means of travel. The main fighting during the three days of the Battle of Arcola occurred on these dikes, which compartmentalized the terrain, and thus the opposing columns of troops met head-to-head.

Will Bonaparte be able to seize the bridge at Arcola and the Austrian artillery park? Will Alvinczy be able to organize a strong counterattack and push the French back onto the right bank of the Adige?