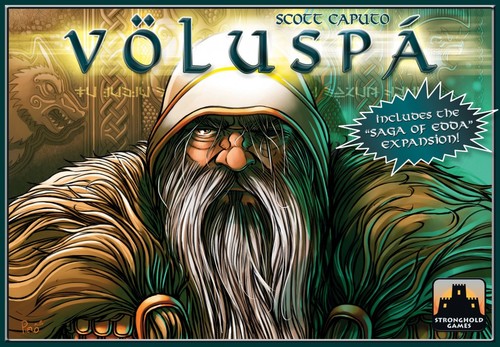 Will Thor survive the challenge of the trickster, Loki?

Will the Valkyries overtake Odin?

In the oldest poem of Norse Mythology, the Völuspá tells the story of the endless struggle of powerful gods, dangerous creatures, and forgotten races. Which beings will dominate? Here the story will unfold differently each time, as a new force rises in dominance!

In the game, Völuspá, the players play tiles with twelve different characters and creatures of Norse Mythology, using the power of these tiles to block, capture or intimidate in order to control other tiles and score points. The player who scores the most points by dominating other tiles wins the game.

Völuspá is an easy to learn tile-laying game with great depth. It is a reimagining and retheming of the highly regarded game, Kachina.

Völuspá includes the expansion module Saga of Edda, which offers even more strategic opportunities and replayability!