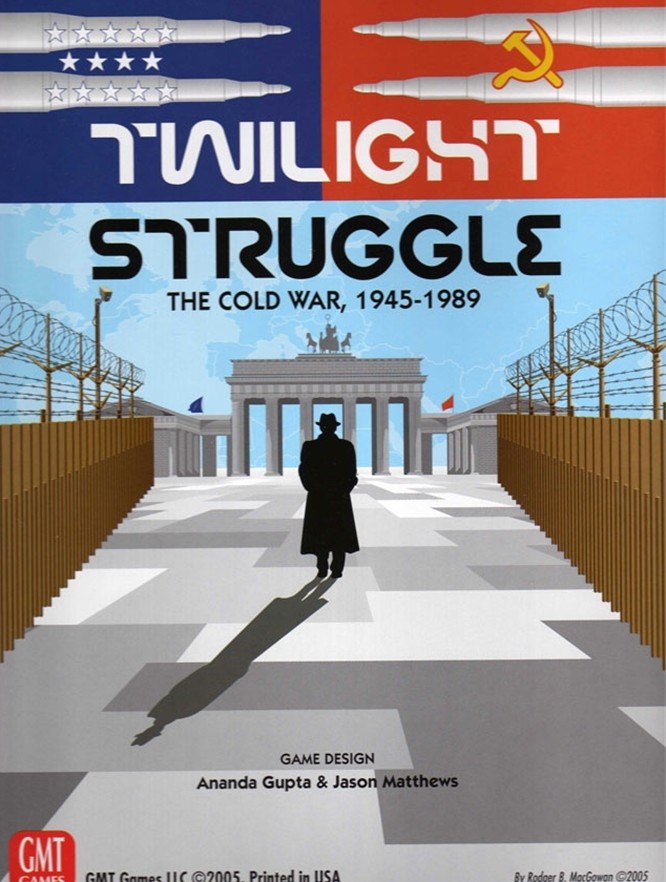 On November 9th of 2009, the world marked the 20th Anniversary of the conclusion of the Cold War. That was the day that the Cold War's most tangible symbol -- the Berlin Wall -- was relegated to the ash heap of history. Unlike the 20th Century's other great conflict, the Cold War did not end in an explosion of neutrons, but rather, an explosion of human freedom and optimism. We had avoided what many thought inevitable -- the destruction of mankind through armed conflict between the Soviet Union and the United States. Overnight, the face of Europe had changed. Suddenly, all things were possible.

This Deluxe Edition of Twilight Struggle seeks to capture the feeling of that earlier era. Twilight Struggle is a two-player game simulating the forty-five year dance of intrigue, prestige, and occasional flares of warfare between the Soviet Union and the United States. Using the card-driven game mechanics pioneered in such award winning games as We the People and Hannibal: Rome vs. Carthage, Twilight Struggle recreates the conflict between the most powerful nation states the world has ever known. The scope of the game covers the entire world as it was found in 1945. Players move units and exert influence in attempts to gain allies and control for their superpower. As with GMT's other card-driven games, decision-making is a challenge; how to best use one's cards and units given consistently limited resources? Twilight Struggle's Event cards add cover a vast array of historical happenings, from the Berlin Airlift, to the Vietnam War and the U.S. peace movement, to the Cuban Missile Crisis.

This Deluxe Edition of Twilight Struggle marries world-class components, with the sort of world-class game play for which GMT is already known. We cannot think of a better way to commemorate this vital piece of world history. We invite you to relieve an era with the words uttered by one of its most iconic statesmen: