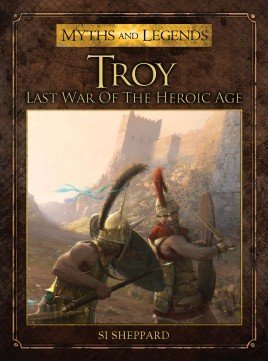 When Paris, prince of Troy, ran off with Helen, wife of the king of Sparta, it launched the greatest war of the mythic age of Greece. Heroes and gods assembled on both sides, as the combined armies of Greece launched a siege that would last for ten years. During that time, famous heroes, such as Achilles, Ajax, and Hector, would find glory on the battlefield, before being cut down. Others, such as Agamemnon, Odysseus, and Aeneas, would survive the war, only to face even greater challenges afterwards. Thanks to the Iliad of Homer, and numerous other ancient sources, the story of the siege of Troy has survived over 3,000 years. In this new book in the Myths and Legends series, Professor Si Sheppard draws together all of these ancient writings to tell the complete story of the Trojan war, from the flight of the "face that launched a thousand ships” to the great wooden horse that brought the city to bloody ruin.