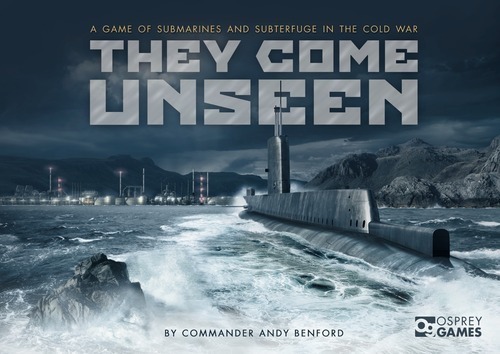 A GAME OF SUBMARINES AND SUBTERFUGE IN THE COLD WAR

WORLD WAR II IS OVER. THE STRUGGLE FOR EUROPE IS NOT.

Facing each other across a divided Europe, NATO and the Soviet Union have reached a stalemate. Two vast militaries, two opposing ideologies, two emerging nuclear powers.

NATO players must use their submarines to infiltrate enemy ports, destroying vital strategic targets, while the Soviet team deploys a surface fleet to hunt down the subs and protect their crucial supply lines. Designed by retired Royal Navy Officer and submarine commander Andy Benford, and developed deep beneath the waves, They Come Unseen is an asymmetrical strategy game of bluff and deception that uses two boards, one for action on the surface, seen by both sides, and one for movement underwater, seen only by the submarine commanders. The game also comes with specially designed control panels to help keep track of vital information such as fuel, ammunition and current cruising depth.

WAR HAS NOT ENDED. WAR IS NOW SILENT. EFFECTIVE. UNSEEN.

Andy Benford is a retired Commander, Royal Navy. Having passed out of the Britannia Royal Naval College, Dartmouth in 1971, Benford embarked on a submarine career that would span twenty-one years and six of the seven seas. He saw service in diesel-electric conventional submarines, a nuclear powered hunter-killer submarine and a nuclear powered Polaris ballistic missile submarine. In 1980 he passed the Submarine Commanding Officers' Qualifying Course, affectionately known as the "Perisher”, and qualified as a submarine commanding officer going on to command an Australian conventional submarine, HMAS Oxley, and to be the second-in-command of the Polaris submarine HMS Revenge. He retired from the Royal Navy in 1993 after the end of the Cold War. They Come Unseen is his first board game. Adam Tooby is an internationally renowned digital aviation artist and illustrator. His work can be found in publications worldwide and as box art for model aircraft kits. He also runs a successful illustration studio and aviation prints business.