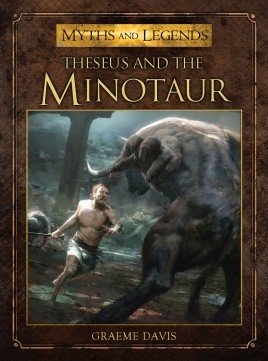 Theseus and the Minotaur

Even before Theseus descended into the labyrinth to face the Minotaur, he was already a famous hero and a veteran of many battles. The son of a man, a woman, and the god Poseidon, he'd journey far across Ancient Greece, fighting numerous monsters including the Periphetes ‘the clubber', the Crymmyon Sow, and the insane demigod, Procrustes ‘the stretcher'. He also survived several assassination attempts, including one by Medea, the famous witch-wife of Jason. Despite these adventures, it was on Crete that Theseus faced his greatest challenge. Taking the place of a sacrificial tribute to the king of Crete, Theseus used his wits and charm to convince the princess Ariadne and the famous inventor Daedalus to help him defeat the dreaded Minotaur, a hideous combination of man and bull that lived in a labrythine dungeon. In this book, Graeme Davis draws upon the classic sources to retell the great myths and legends of Theseus, the founder-king of Athens, and backs this narrative with a factual examination of the myth, its variations, and its development over time. Replete with both classical and modern illustrations, this book is a concise exploration of one of the most enduring myths of Ancient Greece.