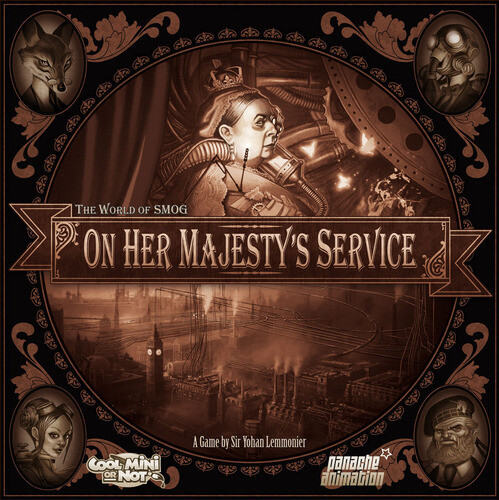 The World of Smog: On Her Majesty's Service (DING/DENT-Very Light)

1889. The mechanical and magical empire of Queen Victoria rules the world.

London has become the center of the world and an extraordinary stage where the appearance of monsters, the return of secret cults and the outbreak of infernal machines regularly contend the front page of The Times.

The last one of these incredible events is the arrival of Oberon, ruler of the courts in Faërie, to be present during the jubilee of the Queen. The ceremony is getting closer and the Queen has secretly invited the most avant-garde Clubs of the capital to join an expedition in the legendary “Shadow Market”. She promised to cover with honors those who will manage to bring back from this dangerous voyage some precious objects: some keys made of adamant and Atlantean metal, a mithril padlock and a magic chain, magic artifacts which cannot be made in the real world!

However, the Shadow Market is a maze out of space and time, where Ether and magic materials are very expensive. It gives shelter to dangerous creatures, which are ready to hinder the path of the unlucky gentlemen and last but not least, some adventurer may end up trapped forever if they won’t manage to pay a heavy tribute in Ether to the guardian of this place – the mysterious Shadow Master. When the great engineer of the Queen manages to open a portal to the Shadow Market, only a small number of the bravest Ladies and Gentlemen are ready to accept the challenge of the Queen. You are one of them!

Thanks to the rotating parts of its game board and its many unique figures, “On her Majesty’s Service” is an unforgettable first gaming foray into the steampunk universe of World of Smog!