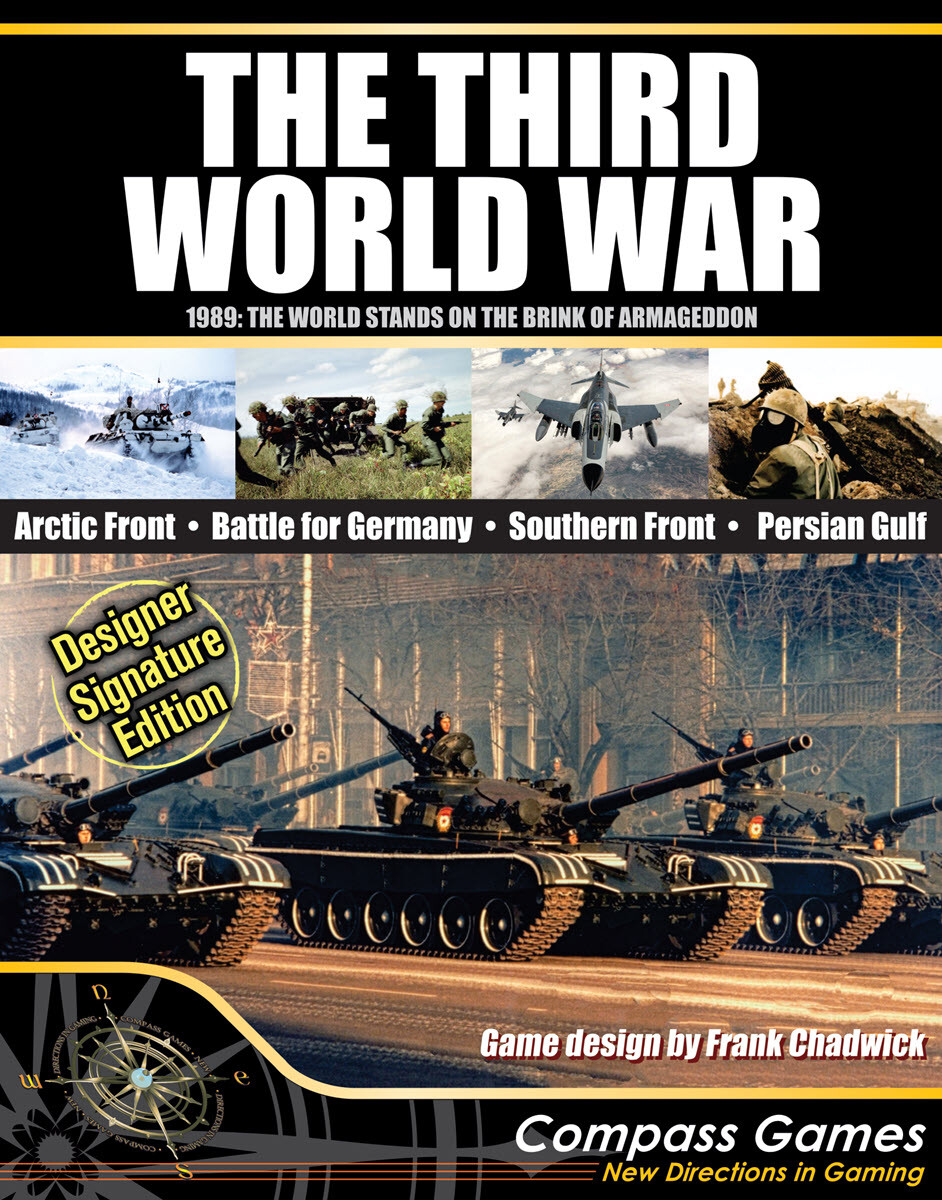 The Third World War, Designer Signature Edition, marks one of the largest and ambitious game undertakings to date covering not one but FOUR true wargaming classics by Frank Chadwick, faithfully remastered and updated with this all-new, deluxe edition. Hailed by many as one of the finest and playable game series covering the NATO and Warsaw Pact, Third World War brings together all four games of the series into one, comprehensive package for all to enjoy.

This edition of The Third World War features many new enhancements and larger counters and is another Classic Reborn! by Compass.

The complete Third World War game series is included which is comprised of the following four games:

Third World War (subtitled Battle for Germany) is a game of the struggle for central Europe by the forces of NATO and the Warsaw Pact.

Arctic Front: Battle for Norway covers the Soviet Leningrad Front, with its special airborne, amphibious, and arctic-equipped contingents, assault of Norway, reinforced with a few elite units from the U.S., Britain, Canada, and other NATO nations.

Persian Gulf: Battle for the Middle East includes a special “game within a game, covering the diplomatic, political, and military maneuvers by the Soviet Union and the United States in the Middle East before – and leading to – the general outbreak of the Third World War.

For the not faint of heart, combined game rules are provided to cover the entire Third World War that combines all four games in the series for a truly memorable gaming experience.

This Designer Signature edition pays tribute to the classic Frank Chadwick game series by honoring the original game system and keeping it fully intact (no design changes made), while introducing many enhancements for game play purposes. The project team involved has hundreds of hours of combined experience with all games in the series and have evaluated all aspects of the game design with a focus on increased playability and improved player aids and markers. In terms of superior physical presentation, all aspects have been upgraded, including completely new maps, numerous new player aids, markers, and unit displays, and redesigned and enlarged 9/16″ counters. Some of the enhancements made in this edition include:

Players: one to two per individual game, one to eight for combined campaign

Unit Scale: divisions, with some brigades and regiments, 100 aircraft per air unit