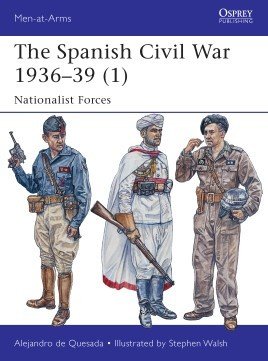 The Spanish Civil War, 1936-39, was the curtain-raiser to World War II, and the major international event of the 1930s. It was the first great clash of 20th-century ideologies, between the rebel Nationalist army led by General Franco (right-wing, and aided by Nazi Germany and Fascist Italy), and the Republican army of the government (left-wing, and aided by the Communist Soviet Union and many volunteers from liberal democracies). Three years of widespread campaigns involved the most modern weapons available. The war was fought ruthlessly by both sides, and when the Nationalists secured victory they installed a dictatorship that lasted until November 1975 - the last such regime in Western Europe. Featuring specially commissioned full-color artwork, this first part of a two-part study depicts the fighting men of the Nationalist forces that strove to take control of Spain alongside their German and Italian allies.