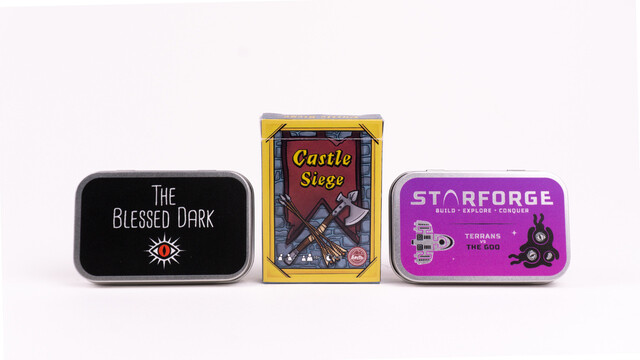 The Poketto Collection is a unique bundle bringing together three easy to play, easy to travel games. In addition to traveling anywhere this 3-pack brings three tabletop theme favorites to the table: Science Fiction, Fantasy, and Horror.

The Blessed Dark is a 2 – 4 player competitive dice and cards game where players try to win by accruing the most victory points through summoning the most powerful demons. Players use blood tokens and dice rolls to fuel their cacodemon conjuring and spell slinging in this ghoulish game. Add a little spooky to your lunch break, or bust out the spirit board and make it a night!

Castle Siege is a 2 player competitive castle combat game where the last structure standing wins. Build up your fortress to defend against invaders, and plot carefully to smite your enemy’s Keep with creatures and weapons.

Trolls, boiling oil, archers, fireballs-- nothing is off limits in this stronghold smackdown! Playable on a table or in only your hands and fingers, there is truly no limit to where the battles can take place!

Starforge is a 2 player competitive craft, construction, and conquest game. Vanquish your enemy by controlling the most victory point dense planets in the galaxy. Planetary conquest will not come easy; players must construct their best ships on their home world, send them into the galaxy and fight among the stars to retain the new worlds they have discovered.

Watch your creations come to life in this hands on assembly adventure!