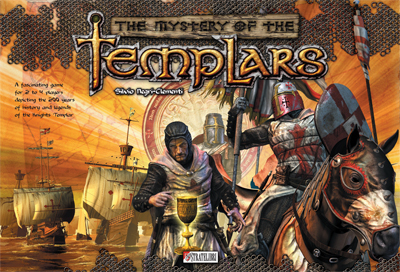 The Mystery of the Templars (DING/DENT-Very Light)

But when our sword becomes bright in our hands, the Word will be as thunder! Then we will attack once, and be not silent until the enemy’s surrender is heard!

In The Mystery of the Templars, you will explore the history of the Puaperes commilitones Christi templique (the “poor comrades-in-arms of Christ and the Temple of Solomon”), and confront the events of two centuries, from 1119 to 1312 A.D., in an exciting strategy game for 2-4 players, aged 12 years and up.

Each player will be the leader of a faction of the Order, who must administer the Order’s monies and trade goods coming from Holy Lands, recruit new knights and manage Templar commanderies all over Europe.

Your adventure will start far away in the Holy Land, escorting pilgrims along the dangerous routes in Palestine and excavating in the night for ancient and precious Christian relics among the ancient ruins of King Salomon’s Temple.

Can you recover these artifacts and keep them safe until the persecution ordered by the King of the french begins on that fateful day of Friday the 13th, 1307? Can you then hide them forever from the craving of Philippe the Fair?

The Mystery ot the Templars is more than a board game: it is the result of fascinating historical research, digging deeply into the legends that continue to feed the curiosity of every generation.

The Mystery of the Templars include a 24-page historical booklet on the History of the Templar Order that is not just a guide to the game and its contents, but also a detailed overview of this incredible brotherhood of warrior-priests that in a very short time would gain respect among all the European courts, and become the most powerful political and economic power for over two hundred years.