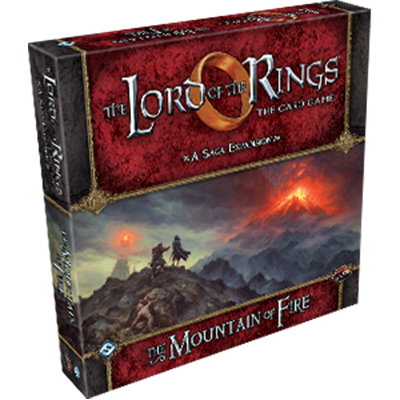 We come now to the very brink, where hope and despair are akin. To waver is to fall.

--Aragorn, The Return of the King

Three epic scenarios grant you the opportunity to adventure alongside Aragorn and Frodo Baggins as they march to the Black Gate, carry the One Ring into the heart of Mordor, and climb the final steps to the fires of Mount Doom. These scenarios are inspired directly by The Return of the King, and their apocalyptic, world-altering stakes are reflected by the introduction of the dire keyword, which raises the threat elimination level to 99, and by rules that allow you to play the final two scenarios simultaneously in Epic Multiplayer Mode, either in standalone play or as the climactic finale to your The Lord of the Rings Saga Campaign!

And it's not just the scenarios that are bigger and more fantastic than ever. The Mountain of Fire is loaded with new heroes, allies, events, and attachments that truly convey the awesome resolve of those noble and daring Men, Elves, Dwarves, and Hobbits that stood at the end against the forces of Mordor.