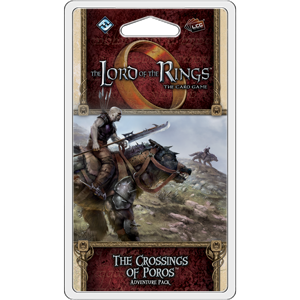 The Lord of the Rings The Card Game: The Crossings of Poros Adventure Pack

The Crossings of Poros is the sixth and final Adventure Pack in the Haradrim cycle for The Lord of the Rings: The Card Game. For several of Middle-earth's heroes, the end to a long and difficult journey through Harad is nearly within sight. These heroes have survived a shipwreck and a desert crossing. They have tamed Mûmakil and allied themselves to a tribe of good-willed Haradrim. They have battled Orcs and Wargs. They have confronted Giant Spiders and wicked Southrons. And they have freed their friends from one of the Dark Lord's dungeons. But now the friends they have freed are slowing them down. The heroes know the Orcs and Wargs will soon return—and in greater numbers. The Southrons will want their revenge. And there are still many miles to cross before they reach the safety of Gondor. With its sixty cards (including a new hero and three copies of each new player card), The Crossings of Poros challenges you and your heroes to find your way through the final stretches of Harad.

Will you lead your company through the desert? Or will you ask them to weave their way through the rocky hills of the Ephel Dúath? Both paths bring their own dangers, and it falls to you to safeguard your heroes, their allies, and their hope for freedom. This is not a standalone product. Requires a copy of The Lord of the Rings: The Card Game Core Set and The Sands of Harad deluxe expansion to play.