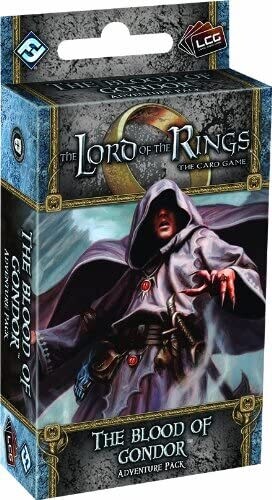 The Lord of The Rings: The Card Game - The Blood of Gondor Adventure Pack

“We have this honour: ever we bear the brunt of the chief hatred of the Dark Lord, for that hatred comes down out of the depths of time and over the deeps of the Sea.”

–Denethor, The Return of the King

After Lord Boromir valiantly leads the war host of Gondor to reclaim the city of Osgiliath, he asks the Rangers of Ithilien to pursue their retreating foes. He also asks several of Middle-earth’s greatest heroes to join the hunt.

The Blood of Gondor is the fifth Adventure Pack in the Against the Shadow cycle for The Lord of the Rings: The Card Game. It immerses players in the dangers and the thrills of the hunt. They control Middle-earth’s heroes in an all-new scenario in which they seek to stop their foes from retreating and regrouping. However, the forest roads of Ithilien are full of perils, and the Orcs and Uruks of Mordor lurk in wait along the way. Will the hunters become the hunted? The Blood of Gondor introduces scenario-specific rules for “hidden” cards and the dark menace of the Black Númenorean.

Not only do the sixty cards in The Blood of Gondor introduce a new scenario, but they also offer players a new hero and three copies each of several new player cards that reinforce the Against the Shadow cycle’s focus on the Gondor trait and cards that enhance the viability of decks built from a single sphere.