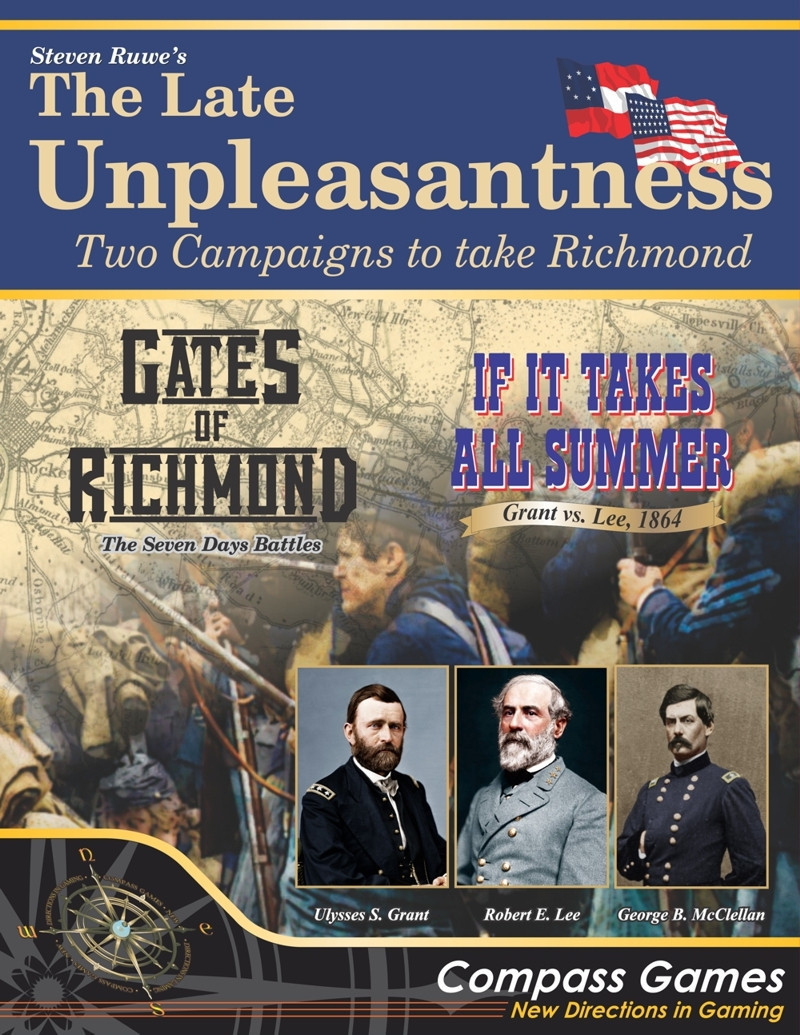 In the spring of 1861, Richmond, Virginia became the capital of the Confederacy.Being a manufacturing powerhouse only 120 miles from Washington DC and the Confederate capital, it became the focus of Union attention. The threat of capture by Federal forces was constant.

The Late Unpleasantness covers the two major attempts to capture the Confederate Capital City. Gates of Richmond covers the Seven Days Battles with Robert E Lee facing down George McClellan. If It Takes All Summer is Ulysses S Grant’s overland campaign of 1864, which added the names of Wilderness, Spotsylvania Courthouse and Cold Harbor to Civil War history.

Each game stands alone, but share the majority of rules. Simple enough to learn and play in an evening, but enough twists and turns to make you want to replay it until it is worn.

The maps use a point to point movement system, rather than hexes to simulate the campaigning over the road networks and river crossings, rather than mass movements cross country. Combat is integrated into the movement, making coordination of large bodies of troops difficult.

The Gates of Richmond map covers the area from Richmond in the west to the White House on the Pamunkey, and from Mechanicsville south to Harrison’s Landing. Key features such as Malvern Hill, Beaver Dam Creek, and the bridges over White Oak swamp and the Chickahominy are highlighted. Will the Union army fail to attack the Richmond works as a result of “Prince John” Magruder’s antics?

If It Takes All Summer covers most of Central Virginia, from Brandy Station and Culpeper to the Cold Harbor north east of Richmond. The Wilderness features prominently in the campaign with a special table to create some of the confusion as a result of fighting in this tangle.

The basic units are divisions (a bit larger than usual for Civil War, but right in this case). Each unit is listed for strength and overall leadership/morale quality.Stacks are hidden for limited intelligence. Corps and Army leaders are available to modify the die roll in an attack as well as to help coordinate attacks from more than a single stack.

Sequence of play is straight forward with supply first.Units out of supply suffer movement and combat penalties and those with a continued lack of supply will suffer attrition.Confederate supply is a simple trace to either Richmond or a railroad, while the Union needs to relocate his base to keep his offensive moving.

Units move, then attack as a part of the stack’s movement. Terrain, strength and leadership are all die roll modifiers, in combat. Combat losses are in terms of strength points, but a third die is rolled to determine if the combat ends in a retreat or continues. If it continues, you count it up and do it again. (and possibly again) If your leaders are good enough, they may be able to break off a losing battle.

Thrown into the mix are random events cards, but the game is not card driven. Each player can hold a hand of up to 10 cards, which can be played in nearly any combination and at any time (except during combat continuation). You use the cards to enhance your units or mess with the other player (ie. Grant steals a march - all Union units +2 MP this turn, or Rain - 1 left shift on all attacks) Others are one-time events (Sedwick gets killed, Jackson falls asleep) that will ruin your perfect plan.

Each game can be picked up and learned in under 30 minutes, and played entirely through in 4 hours or less. The cards, leaders and Wilderness/Magruder tables add a level of chrome and history to the games without making them difficult. Combined with the hidden strengths and dummy counters, no two games are ever the same.