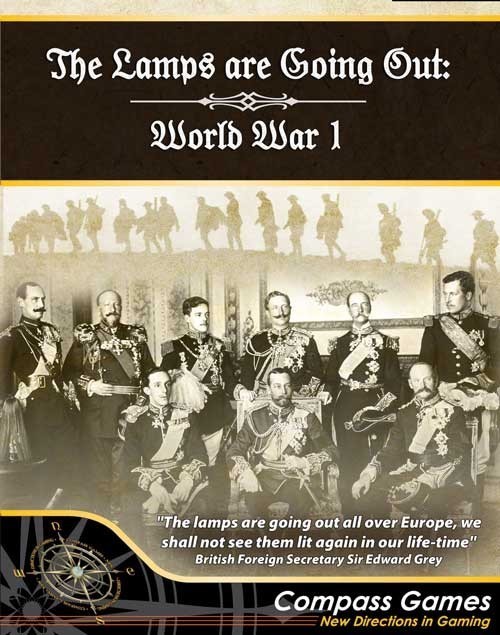 The Lamps Are Going Out: World War 1 (2nd Edition)

"The lamps are going out all over Europe, we shall not see them lit again in our lifetime."

The Lamps Are Going Out is a game simulating World War I at the grand strategic level. Many of the economic and military factors have been simplified to make game play as easy as possible, while still accurately portraying the balance of forces, strategies, constraints and ultimately the grand decision-making involved. This is a game pitting the Central Powers against the Triple Entente and spans the entire war from August, 1914 until November, 1918. All theatres are represented on the area control map from Europe to the Near East and East Africa, as well as the naval war in the Atlantic – from the British blockade to the German U-Boat campaign.

The core of the game is the conducting of movement and offensives of field armies in an attempt to deplete, breakthrough, and force retreats of enemy armies to gain territory and/or eliminate opposing forces. Mobilizing new armies and supplying depleted armies requires the allocation of Production Points, a scarce commodity that varies from nation to nation and represents the industrial capacity for war as well as the manpower, logistical capacity, and training of each country's military. Each side also races for the next technological breakthrough in order to gain an advantage on the battlefield, from advances in aviation and artillery to U-Boats and poison gas. Event cards for each of the four game factions provide for political developments, leadership, friction, and military developments particular to the nations involved. Technology cards allow players to invest in and research advances along several branches.

In The Lamps Are Going Out, players are free to employ whatever strategies they feel will best help them win, but the geography, manpower, and resources available within the game will lead to many of the same dilemmas felt by the historic leaders. Playable in an evening, the simple yet realistic production and combat system allows the war to unfold with historic fidelity while allowing the players great latitude to employ varied strategies to direct their forces and allocate their limited resources in order to keep their armies ready for action amidst the attritional nature of the conflict.

The second edition incorporates all supplemental material from the original game and includes a mounted map board, additional event cards, expanded rules, and improved systems.